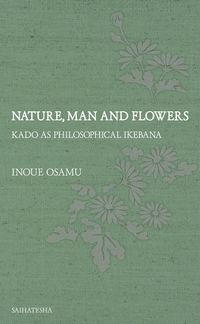 Kado is a concept that emphasises the philosophical aspect of ikebana, or traditional Japanese flower arranging culture. Ka means “flowers,” and do means “way.” Thus, kado means “the way of flowers” or “the way through flowers.” This way leads to the truth, and consequently, the way itself is the truth. In kado, it is the practitioner’s goal to find this way through arranging flowers as the symbol of nature. We might therefore call it “dynamic Zen.”

Of course, the artistic aspect of flower arranging culture, namely ikebana, should not be denied, and should be valued as a part of traditional flower arranging culture. However, it is just a part and not the whole picture of this culture. This book aims to emphasise the other part, kado, and redress the balance of interpretation of this traditional culture. Our standpoint is to regard this culture as a philosophical or religious way, not as so-called art.

The structure of this book is as follows. The first chapter is an overview of the history of kado, the second chapter explains its traditional regulations. Finally, the third chapter, considers the thought which has been the basis of the concept of kado.

Inoue Osamu is Associate Professor of Department of Art Studies and Cultural Production at Kyoto University of arts.