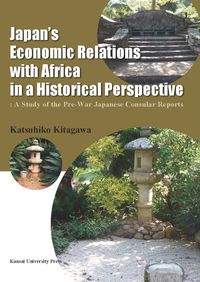 It considers Pre-war Imperial Japan’s economic diplomacy to Colonial Africa from the victory of Sino-Japanese and Russo-Japanese Wars to the Eve of defeat in Asia-Pacific War and gives a view on the position of Independent Africa in the Post- war Japan’s International Relations. It argues that the history of Japan-Africa relations was part of Japanese history and part of African history as well and the Study of both history will extend our understanding of the World history as related with each other
and simultaneously progressing in parallel.

1 Introduction
1 Japan, Africa and the International Economy between the Wars
2 Contents of this Book

Katsuhiko Kitagawa is Professor Emeritus of Kansai University, and was Professor of Economic History and African Studies.

He took his BA and MA at Kansai University and his PhD at the Graduate University for Advanced Studies in Kanagawa.

In 1999-2000 he was Academic Visitor at University of Kwa Zulu Natal working on South African economic and social history, and Japan’s trade relations with South Africa in the Inter-War Period.

He has written and edited several books on social and economic history in Sub-Saharan Africa, the history of the British Empire and contemporary African political economies.

He was President of the Japan Society for African Studies (JAAS) 2006-2009 and the Japan Association of Private University Libraries (2009-2011).

He has written and edited many books and articles in both Japanese and English, including Contemporary African Economies : A Changing Continent under Globalization (Co-editorship with Takahashi Motoki, Tokyo, African Development Bank, 2016), History and Culture in Africa (Co-authorship with Kusamitsu Toshio, Tokyo, Education Promotion Society for Open University,2013), “Japanese Competition in the Congo Basin in the 1930s”, in Latham, A.J.H. and Kawakatsu, Heita (eds), Intra-Asian Trade and the World Market, London, Abingdon : Routledge, 2006, “Japan’s economic diplomacy in colonial Africa during the inter-war period”, Latham, A.J.H. and Kawakatsu, Heita (eds), Asia and the History of the International Economy :Essays in Memory of Peter Mathias, London, Routledge, 2018.