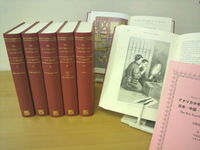 Volume 2:
The Boy Travellers in the Far East Part 2 - Adventures of Two Youths in a Journey to Siam and Java, with Descriptions of Cochin-China, Cambodia, Sumatra and the Malay Archipelago
Harper & Brothers, 1881, c. 450 pp.

Volume 3:
The Boy Travellers in the Far East Part 3 - Adventures of Two Youths in a Journey to Ceylon and India, with Descriptions of Borneo, the Philippine Islands and Burmah
Harper & Brothers, 1881, c. 490 pp.

To my Young Friends:

Not many years ago, China and Japan were regarded as among the barbarous nations. The rest of the world knew comparatively little about their peoples, and, on the other hand, the inhabitants of those countries had only a slight knowledge of Europe and America. To-day the situation is greatly changed: China and Japan are holding intimate relations with us and with Europe, and there is every prospect that the acquaintance between the East and the West will increase as the years roll on. There is a general desire for information- concerning the people of the Ear East, and it is especially strong among the youths of America. The characters in " The Boy Travellers " arc fictitious; but the scenes that p assed before their eyes, the people they met, and the incidents and accidents that befell them are real. The routes they travelled, the cities they visited, the excursions they made, the observations they recorded?in fact, nearly all that goes to make up this volume?were the actual experiences of the author a t a very recent date. In a few instances I have used information obtained from others, but only after careful investigation has convinced me of its entire c orrectness. I have aimed to give a faithful picture of Japan and China as they appear to-day, and to make such comparisons with the past that the reader can easily comprehend the changes that have occurred in the last twenty years. An d I have also endeavored to convey the information in such a way that the stor y shall not be considered tedious. Miss Erne and " The Mystery" may seem super fluous to some readers, but I am of opinion that the majority of those who per use the book will not consider them unnecessary to the narrative.
In preparing illustrations for this volume the publishers have kindly allo wed me to make use of some engravings that have already appeared in their publ ications relative to China and Japan. I have made selections from the volumes of Sir Rutherford Alcock and the Rev. Justus Doolittle, and also from the exce llent work of Professor Griffith’s, " The Mikado's Empire." In the episode of a whaling voyage I have been under obligations to the graphic narrative of Mr. Davis entitled "Nimrod of the Sea," not only for illustrations, but for inci dents of the chase of the monsters of the deep.
The author is not aware that any book describing China and Japan, and speciall y addressed to the young, has yet appeared. Consequently he is led to hope tha t his work will find a welcome among the boys and girls of America. And when t he juvenile members of the family have completed its perusal, the children of a larger growth may possibly find the volume not without interest, and may gle an from its pages some grains of information hitherto unknown to them.