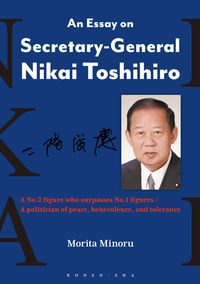 An Essay on Secretary-General Nikai Toshihiro A No.2 ﬁgure who surpasses No.1 ﬁgures / A politician of peace, benevolence, and tolerance

Introduction Why I publish 'An Essay on Secretary-General Nikai Toshihiro' now
Chapter 1 The real pictures of Nikai Toshihiro, who always acts up to the “with the people” attitude and “paciﬁ sm”
Chapter 2 Nikai Toshihiro is the best and brightest No.2 statesman who surpasses No.1 politicians
Chapter 3 Nikai's political achievements which surpasses those of “No.1” ﬁgures
Epilogue Investigating unique political philosophy and methods of Nikai Toshihiro
Afterword

Morita Minoru was born in 1932 in Ito, Shizuoka Prefecture. He graduated from the University of Tokyo’s Engineering Department and, after holding such positions as the chief of publication department of Nihon Hyoron-Sya and the editor-in-chief of “Economic Seminar” magazine, got established as a political commentator in 1973. After that, he has been active in various areas such as radio, publication, and lectures. He is an honorary professor of Shandong University, a visiting professor of Higashi Nippon International University, and the director of “Morita Minoru Research Institute for the Global Civilization”.He has published many works, including ‘森田実の言わねばならぬ 名言123選’, ‘一期一縁’, ‘公共事業必要論’, ‘防災・減災に資する国土強靱化政策が日本を救う！’, ‘森田実の永田町政治に喝！’. And he posts his essays on Facebook occasionally.