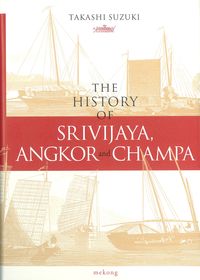 THE HISTORY OF SRIVIJAYA, ANGKOR and CHAMPA

The history of the ancient Southeast Asia written in the 20th century was full of mistakes and misunderstandings. Many of western historians have no knowledge of the Chinese script and did not read the Chinese text, for instance “The official history of the Chinese Dynasties”. Of course, there are some translations of the Chinese text, but the translators did not fully understand the historical situations. The main sources of these Chinese texts are reports of the foreign envoys. There are some exaggeration and lies, but generally their reports were correct and reliable compared with other sources.
After G.Cœdès established ‘Palembang hypothesis’, all the historians had gone to the wrong way, and the histories of Southeast Asia were misguided to the unrealistic direction. The existing history of Srivijaya has been totally wrong. Wrong history has been lectured to students for 100 years. Even today, many people believe that the capital of Srivijaya was located at Palembang in the Sumatra Island. However, I have discovered that Palembang theory is completely wrong. The location of Srivijaya （Shi-li-fo-shi） was in the Malay Peninsula and its capital was Chaiya, Surat Thani province of Thailand. In the Xin Tang Shu （New History of the Tang Dynasty, 新唐書） clearly states that “the west of Shi-li-fo-shi is the Nicobar Islands”. So, Shi-li-fo-shi was in the Malay Peninsula, not Palembang.

Very few historians had criticized G.Cœdès’ theory. However, M. Vickery has correctly criticized G.Cœdès about his historical theory on Khmer, but M. Vickery has probably embraced Palembang theory. There have been so many followers of G.Cœdès. Q. Wales had opposed G.Cœdès in many points but admitted that Yi Jing had been to Palembang. Yi Jing had never been to Sumatra, he just stopped over the Mulayu （末羅瑜）kingdom in his itinerary. Mulayu was located at the Riau Islands, just in front of Singapore in the 7th century, and which was an intermediary state of ‘East-West’ trade.
Dr. Junjiro Takakusu put a sheet of map, in his translation of Yi-Jing's （義浄） Nan-hui Chi-kuei Nei-fa Chuan （南海寄帰内法伝）. His map contains serious mistakes. Yi-Jing had never been to Palembang and he stopped over Kedah not Aceh. Yi-Jing's real itinerary course was Chaiya （室利仏逝）⇒Mulayu （末羅瑜＝in front of Singapore）⇒Kedah （羯茶）⇒Nicobar Islands （裸人國＝Naked people islands）⇒Tamralipti （Bengal port）⇒on-land route to Nalanda （India）. However, Dr. Takakusu had been misguided by Chinese historian, Ma Huan （馬歓）. He believed what Ma-Huan （馬歓） wrote, the“Ying-Yai Sheng-Lan （瀛涯勝覧）”, in 1416, in which Ma dictated that Ku-kang （旧港=Old Port） is the same country as was formerly called San-fo-chi （三佛斉） , and Ku-kang was also called Palembang （浡淋邦）, under suzerainty of ‘Jawa （Indonesia）’.

It goes without saying that the ancient Southeast Asian history has many ‘missing links’. It is historians’ duty to compensate for ‘missing links’, but as far as I know very few of them have been successful. On the contrary, many mistakes have been propageted around the world. That is because historians are lack of imagination and ability to make the scenario of the ancient history of Southeast Asia. So, there is no integrated theory to explain starting Funan to establishing the Angkor Dynasty. G. Cœdès tried to make such story, but miserably he failed at the starting point.
I want to point out here is that ‘economic geographical’ perspective must be incorporated more in the Southeast Asian ancient history research. Of course, past historians also introduced geographical elements, but so many historians have been dragged to the wrong directions. It is because they have accepted uncritically the theory of G. Cœdès.
So, we should not forget nor neglect to study the approximate economic development and evolution. However, they made too many misunderstandings and mistakes. The western historians contributed very much to read inscriptions, but their theories are often incomplete and derailed. They have been regarded as authorities, so few of them would change their historical view. Now is the time when the ancient history of Southeast Asia should be revised and rewritten.
I have no intention to accuse the mistakes of preceding historians. I have lot of things to study from them. I have no teacher nor friend who taught me history, I only attended the class of Prof. Koji Iizuka at UOT more than 55 years ago. He taught me the splendors of the oriental culture. I have continued my study for more than a half of century, I have still many problems to solve by myself. Our history is deep and heavy.