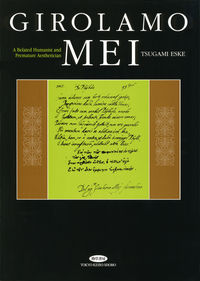 In Girolamo Mei: A Belated Humanist and Premature Aesthetician, Tsugami Eske discusses Mei, a sixteenth-century Italian scholar, as an independent thinker. While previous studies have generally treated him in connection with the birth of opera, this book examines his writings concerning the ancient theory of musical modality and the performance style of Greek tragedy in both their content and the historical perspective. Based also on analyses of Mei’s epigram De Phyllide and classification of the arts, Tsugami reveals him to have been inclined to declining humanism as well as emerging aesthetics.

Chapter 2 From the Theory of Music to the Aesthetics of Music
2.1. Mei's view of ancient music
2.2. Music's autonomous power of expressing emotions

Part II THE PERFORMANCE OF ANCIENT TRAGEDY, AS RECONSTRUCTED FROM THE ARISTOTELIAN POETICS

Chapter 7 Mei and the Recitative Theory of L'Euridice
7.1. Peri's theory of the recitative
7.2. Palisca's view
7.3. Mei and Peri in historical perspective
7.4. Boethius the mediator

津上 英輔（つがみ えいすけ）
TSUGAMI Eske, professor of aesthetics at Seijo University, Tokyo, was educated at Tokyo and Freiburg Universities. He has published a series of books and articles on everyday aesthetics and on Girolamo Mei, including a critical edition of his De modis (On the Modes)(1991), of which Tsugami is preparing an English translation.